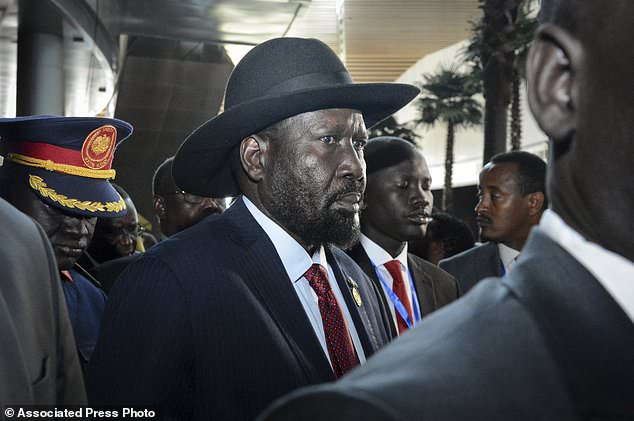 KAMPALA, Uganda (AP) – South Sudan President Salva Kiir on Monday was named the top “spoiler of peace” in a new award that seeks to shame him and others into taking serious steps to end bloody conflict in the world’s youngest country.

Kiir and rival leader Riek Machar are under growing pressure to form a coalition government this month, the significant next step in a fragile peace deal signed in 2018 to end a five-year civil war that killed nearly 400,000 people.

The deadline has been extended twice and the international community is signaling impatience. The upcoming deadline is Feb. 22.

“It is for me totally unacceptable that we are still again close to the deadline of a new period that was declared, that there is no agreement on a number of issues,” U.N. Secretary-General Antonio Guterres said over the weekend. “Respect your people.”

Now a Uganda-based group, Atrocities Watch Africa, is citing Kiir and others for their roles in the conflict that also has displaced at least 2 million people. Many fled to Uganda.

The “spoiler of peace” award citation accuses Kiir of being unwilling to compromise on major issues needed to form the coalition government. It also asserts that under his command and control, government-backed fighters killed thousands of people and committed atrocities such as looting and razing villages.

Museveni: “No single reason for reducing number of 32 states which are demanded by the citizens”