Peter Jok wasn’t like other kids his age the first time he saw snow. He had no memories of Christmases past, of presents opened, of snow days. Instead, Jok was just cold. Cold and confused.

The white powder falling from the sky in Des Moines, Iowa, was as unfamiliar as the community, Prescott Valley, he now calls home.

It was a harsh reminder that Jok’s life had changed forever. The capital of Iowa is a long way from where his story began. 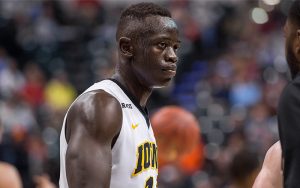 These days Jok is a 6-foot-6 guard for the Northern Arizona Suns, an NBA G League team and minor league affiliate of the Phoenix Suns. Even though the season is over, Jok is preparing to compete with Iowa United in The Basketball Tournament, a 64-team, single-elimination competition that begins in July with a winner-take-all prize of $2 million.

Jok was born in Khartoum, Sudan, in 1994. A member of the generation of Sudanese children known as the “Lost Boys of Sudan,” Jok’s day-to-day life was that of war and destruction as he grew up during the Second Sudanese Civil War.

Early in his life, Jok lost his father due to the war. He didn’t lose the memories many have of him.

“If you say his name, everyone in South Sudan knows him,” Jok said. “I didn’t know him that well but the stories that I hear from everyone else are great stories. (He) seemed like a great man.”

The tragedy left Jok and his siblings with the matriarchs of the family, his mom and grandmother. Through faith and family, Jok escaped the conflict and joined his aunt and grandmother in the United States after a church group brought him here.

Astute from a young age, Jok understood the reality of his situation in Sudan relative to the opportunities in the United States.

“I was really excited to come to America,” Jok said. “The main reason we came to America was for education. (I’m) trying to use that to go back and help people.”

Many refugees dream of returning to their home countries to make them better, but few have the resources to make it happen. Here is where Jok, 25, hopes to separate himself, thanks to an elite skill he’s developed, and a mindset to match.

Basketball wasn’t always a source of joy for Jok. The sharpshooting guard can trace his path in basketball not to a love of the game at first, but a love of McDonald’s.

“My guardian wanted me to play for his AAU team, and I didn’t want to because I didn’t like basketball.” Jok said laughing. “I went to a few practices and he would always take us to McDonald’s after and I just told (my mother) that I was going to keep going for McDonald’s and that’s the reason how I got into basketball.”

The golden arches served as incentive for Jok to continue playing. However, soon the meals weren’t necessary. He started to enjoy the game.

The budding romance would take Jok a long way. He rose to the highs of being the No. 1 rated high school player in his class in the state of Iowa, and the lows of a devastating knee injury which forced him to miss time. As a result, much of the top tier courtship stopped. 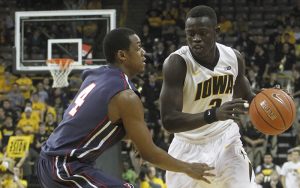 Peter Jok of the Northern Arizona Suns turned a successful career in Iowa into an NBA opportunity. (Photo by Matthew Holst/Getty Images)

“I had every school in the nation (recruiting me) in ninth grade, so I could’ve went anywhere.” Jok said. “But as soon as I got hurt, a lot of schools disappeared.”

Ultimately, Jok showed the resilience that has become his calling card. After a successful four-year career at the University of Iowa, Jok capped off his career by winning the collegiate three-point shooting contest.

That elite skill landed him a spot with the Northern Arizona Suns, where his coach, Bret Burchard, has applauded the strength that Jok has shown throughout his life.

“To me it’s unfathomable,” Burchard said. “Something so distant from what I’ve experienced. When you first hear those stories it’s like, ‘Is this true?’ To see where he’s at now having gone through that stuff is just remarkable, the strength of character and perseverance.”

That recognition doesn’t just come from his coaches. His teammates also realize what he’s gone through to get to this point, and how much he doesn’t outwardly portray his challenges.

“Even if it was a hard experience, I couldn’t tell because he doesn’t want anyone to treat him any differently,” said Eric Stuteville, Jok’s roommate and teammate.

Although playing professional basketball is a passion, it’s not the endgame for Jok.

Jok has been preparing himself for life after basketball. His mindset is rooted in the strong family values that have been instilled in him.

“It’s because of my dad,” Jok said as the reason for his strong desire to make an impact in Sudan. “My dad was a big community person. He did whatever he could to help.” 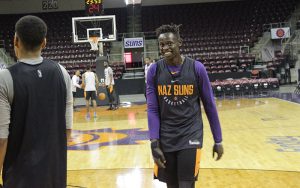 Although his father is no longer alive, the support system standing behind Jok is strong. He has a large family spread all over the globe that is in his corner, something his coach says is crucial to his success.

“The cool thing about Peter is that he has a lot of people that care about him. If he has had down moments this year, he has good people in his ear that have encouraged him to keep going in the right direction.”

That direction is pointing Jok back to the country he once called home. He understands the value of meeting everyone, because they could prove to be an important connection.

“Sometimes they call him Mr. PV, Mr. Prescott Valley, because he’s a little bit of a politician,” Burchard said. “He shakes hands with everybody, meets everyone. I think he has the mayor’s cell phone number. That’s who he is.”

“I’m a people person,” Jok said. “In today’s world it’s about who you know, not what you know. You never know who you’re talking to or who you’re meeting.”

That simple philosophy has trickled down to his teammates who realize that a basketball career is finite.

“That’s one thing I’ve picked up from him,” Stuteville said. “As a basketball player you have so many eyes on you at all times. Putting yourself out there and making those connections for later on … playing basketball doesn’t last forever. When you get done playing, you want to have those connections so when you’re done you don’t have to start from square one.”

He has already started to prepare for when his basketball career comes to an end.

Jok is on a mission to change both the perception of his home country and the day-to-day situation within its borders, from an ocean away.

Jok’s older brother, Dau, has a foundation established that sends sports equipment and books to their home country.

Peter wants to take it further and make an impact on the ground as well.

“My ultimate goal (is) trying to get to the NBA, make a lot of money, and then go back and help in South Sudan, (and) try and build a library or a school,” Jok said. “I feel like education is the key. If the kids get educated back home it’ll be a better place, because right now it’s not where we want it to be.”

Jok knows where he wants South Sudan to be. Since leaving as a child, he hasn’t returned to his birthplace due to the ongoing conflicts.

“When you think about South Sudan, you think negative,” Jok said. “I’m trying to be part of the reason we turn it to a positive for the future generations. I want people to have their kids go back to South Sudan, I want to have a home in South Sudan and spend my time there with my people.”

“If you go through things like he’s gone through, you’ll respond to adversity in different ways,” Burchard said. “I think it (his life experiences) shaped who he is and gave him a good perspective on what he’s doing here in Prescott Valley.”

Prescott Valley, the latest stop on a journey that in a perfect world for Jok, will start and end in the same place. A place he once called home, and a place he wants to help improve.

Related Topics:South Sudan NewsSport
Up Next